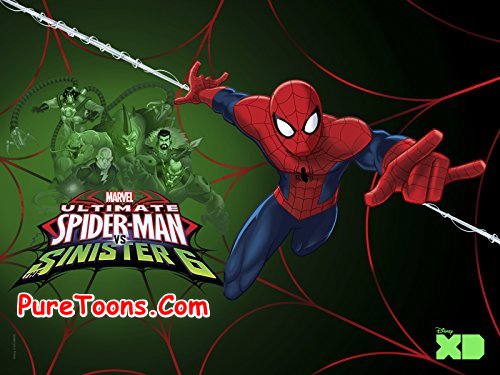 Summary: As the fourth and final season begins, Doctor Octopus allies himself with Arnim Zola and HYDRA and begins to form a new iteration of the Sinister Six starting with Kraven the Hunter. When Doctor Octopus attempts to turn Norman Osborn back into Green Goblin, he finds that Osborn injected himself with an anti-Goblin serum to prevent further transformations. Doctor Octopus then uses the Siege Perilous to summon the Green Goblin”s demonic winged counterpart from Miles Morales”s universe and after a brief battle recruits him instead. He bribes Rhino into becoming a spy for him while operating as a student at the S.H.I.E.L.D. Academy in exchange for finding a cure for his condition. Spider-Man forms his own new team consisting of Agent Venom, Iron Spider, Miles Morales (going by the name Kid Arachnid now), and the newly introduced Scarlet Spider (who has no identity and is later named Ben by Aunt May). It was later revealed that Scarlet Spider was the real spy for Doctor Octopus, and unmasks Spider-Man in front of Doctor Octopus, revealing his identity. This leads to Doctor Octopus leading up to his next plot that has him turning against Arnim Zola and captured Aunt May. However, Scarlet Spider has a change of heart at the last minute, he ends up sacrificing himself to save the city from Doctor Octopus.

Soon after, Spider-Man discovers the reason behind Fury and Nova”s disappearance; they were protecting Madame Web from HYDRA, but were ultimately discovered and Fury was held hostage by HYDRA and Crossbones. After Fury was rescued by Spider-Man, Web and Triton, Fury and Web went into hiding again to protect themselves from HYDRA, with Fury leaving Spider-Man in complete control of S.H.I.E.L.D. Academy during his absence. Later, Crossbones and Michael Morbius do some experiments with the Venom symbiote which leads to the revival of Carnage leading up to Carnage”s explosion causing every civilian to turn into Carnage-like monsters. Harry awakens from his coma and reverts into Anti-Venom, and begins the drain the Carnage symbiotes away from the civilians. After losing control, Peter reveals his identity to Harry, who reverts to himself, before re-emerging with Anti-Venom to destroy the Carnage symbiotes. The Carnage symbiote revealed itself to still be alive, however, and goes on a rampage throughout the city in direction of Mid-Town High to find Mary Jane Watson, who was overtaken by the Carnage symbiote to become the “Carnage Queen”. They are attacked by Morbius, who became a living vampire due to the injection he received from Doc Ock. Spider-Man, Agent Venom and Harry Osborn ultimately save Mary Jane from the symbiote after revealing their identities to her, and she destroyed the symbiote herself. Unbeknownst to Spider-Man, a fragment of the Carnage symbiote is inside her body.

Later on, Madame Web comes to the conclusion that the destruction of the Siege Perilous during the fight with Doctor Octopus and alternate Green Goblin has shattered the dimensional barriers between numerous worlds. Spider-Man and Miles Morales travel to alternate realities in order to collect the pieces of the Siege Perilous, but an evil version of Spider-Man named Wolf Spider seeks to reassemble the pieces in his plans to conquer the Multiverse. During their adventure, they reunite with Spider-Man Noir and meet other spider-based characters as they work to get to the Siege Perilous shards before Wolf Spider does. They find the last piece in Miles” native dimension where they learn that since he and Goblin left, crime got even higher and the universe”s native Aunt May, feeling that it needs a Spider, used leftover equipment from the universe”s native Peter Parker (who died in a fight with the demonic Green Goblin) to turn one of his friends Gwen Stacy into a new spider-powered hero Spider-Woman. Together with her, they repair the Siege Perilous, but Wolf Spider manages to swipe it and go forth with his plan. Spider-Man manages to deceive his evil counterpart into absorbing too much power, causing him to explode which sends the life force of the other spiders back to their native homes. Although they have the Siege Perilous and after seeing how well Spider-Woman has done with protecting his universe, Miles decides to let her remain as the main spider-powered person of it, while he and his mother Rio Morales permanently settle in Spider-Man”s native dimension.

Then the graduation day comes in which Doc Ock warns Peter Parker that he should never become Spider-Man and saves his Aunt May from dying. Spider-Man quickly goes to the Triskelion and assembles all the Web-Warriors and New Warriors, and tells them about what happened in the morning. In the series” climax, despite being outnumbered by Doctor Octopus” New Sinister Six, Spider-Man is still able to save the day by using an antidote similar to the one which would leave him powerless to cure Vulture, Rhino, and a Lizard-mutated Crossbones and defeating Scorpion and Kraven. With the same antidote, Spider-Man also defeats Doctor Octopus in his mindless Octopus monster form, on which Octavius is eventually convinced that Spider-Man shows respect on him despite all difficulties and redeems himself by helping Spider-Man undo the force-field he projected to destroy Spider-Man”s teammates and Graduation attendants. In the epilogue, Doctor Octopus eventually surrenders as he is taken under custody by Iron Man, Spider-Man successfully graduates as Agent Venom and Scarlet Spider are named the new teachers in S.H.I.E.L.D. Academy. After a conversation with his Aunt May (after moving to another home), Peter eventually takes on his old super hero life satisfied to have finally become what he trained in S.H.I.E.L.D. to be: the Ultimate Spider-Man.